Our club operated in the American Radio Relay League Field Day June 28-29, 1997, using our new club callsign of N2RE. We operated from the grounds of the Sarnoff Corporation, located near Princeton, NJ on US 1 between Fisher Place and Harrison Street. We had more than 25 people participate in our Field Day this year, the weather cooperated, and most important, everyone seemed to have fun.

Click on these links to view newspaper articles about our Field Day operation that appeared in The Times and US 1.

Special kudos to Rod KB2MRI for coordinating our Field Day preparations, to Bette WB2MNX for bringing dinner to the hungry operators Saturday night, and to Tom WA3KIJ for providing the photos! 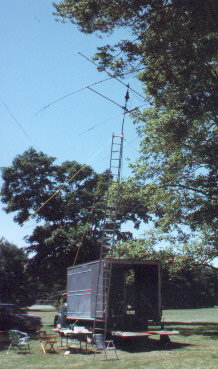 This was our main operating location. The Sarnoff Corporation allowed us to use this truck for the weekend. One of our two HF stations and our packet station were inside the truck. Our VHF station was located on the table located outside the truck.

John WB2YGF and Barb N2ZKA again this year brought their trailer (to the left of the truck, not visible in this photo) and operated our second HF station from inside it.

A HF triband beam was mounted atop an extension ladder "tower" which was secured to the truck and steadied by ropes tied to adjacent trees. The tribander was equipped with an Armstrong rotator (a long rope attached to the reflector element.) Above the tribander was a 13 element 2 meter beam with an automatic rotator. Just visible at the top of the photo are our two dipoles fed by open-wire feedline which we used for 80 meters and 40 meters. They were deftly lofted over the mature trees on the site by Bob N2LO. 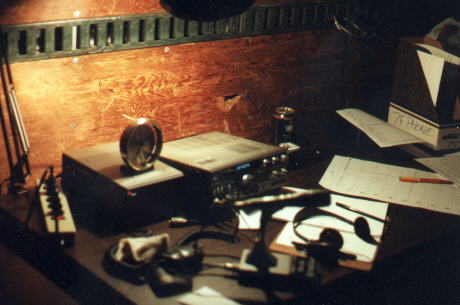 This is the HF operating position inside the Sarnoff truck as it appeared Saturday night. The truck was actually very pleasant to operate from. Its location under a shade tree kept it cool in the daytime, and it provided some relief for our legs from the mosquitos at night. 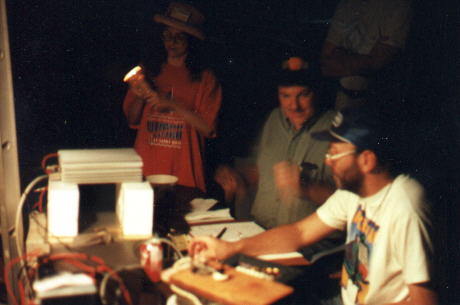 This is our VHF and satellite station in action during one of the Saturday night satellite passes. John NU3E is in the foreground operating the transmitter and Charlie N2CTW is tuning the receiver to compensate for Doppler shift while Rebecca uses a flashlight to check the direction of the transmit antenna. Just behind the operating position (not visible in this photo because of the darkness) Bette WB2MNX was hand-tracking the 440 MHz receiving antenna, supported on a stepladder, by listening for maximum received audio. We completed 2 successful satellite QSOs: 1 CW, and 1 SSB.